With more than 200 million users to date, Viber finally took the giant leap by entering into the world of personal computers.
The free cross-platform instant calling and messaging application for mobile devices just released a counterpart for Mac and Windows users. Similar to what is currently being offered by Skype; the new Viber desktop also included a video calling solution, only in beta.

For those who want to get the desktop experience, you can download the installation files directly from Viber’s official site. You’ll be asked to choose from different PCs and mobile platforms. You can choose from either Windows or Mac. The Linux counterpart is not yet available but as reported by Engadget, Viber Media is definitely working on it as well. In addition, the installation wouldn’t take you long, as the file size is less than 2MB.

The prerequisite to use the desktop app is to have it installed and registered in your smartphone. Viber uses your mobile number to register for their service. Unlike in Skype, you need an email address. Why mobile number? The Viber desktop needs to access your phone’s contacts. Since it isn’t a standalone app, you don’t need to re-invite your buddies. It uses your phone number to receive voice calls and messages. One of the best things about the app is that it is absolutely free. All you need is an internet connection. Voice calls are rendered in high quality and unlike other chatting services; you won’t experience any delays from the other end of the line.

The user interface is simple, clean and functional. There’s a search bar, an address book, recent activity icon and a dialer. The dialer includes a clickable flag icon for international calling. Upon switching flags, the respective country code will automatically be added and Viber won’t charge you for IDD calls. 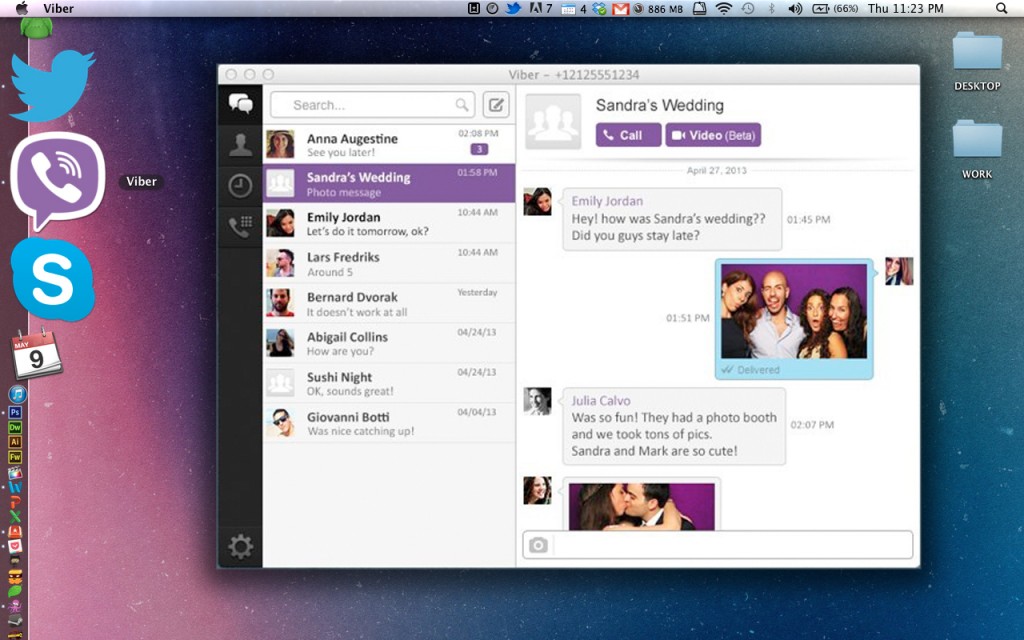 Along with the release, the current iPhone and Android app was also updated with Viber 3.0, bringing significant changes in its user interface. Viber also updated its app for Samsung Bada, Windows Phone, Blackberry, and Nokia’s Belle and Symbian OS.

Is Viber trying to dominate both the mobile and computer market? The WhatsApp instant messaging service which was Viber’s competitor is now significantly left behind. With millions of people using Viber’s services, this can be a possibility. What do you think about the Viber for desktop? Share your thoughts with us below.

Viber for Windows
Viber for Mac