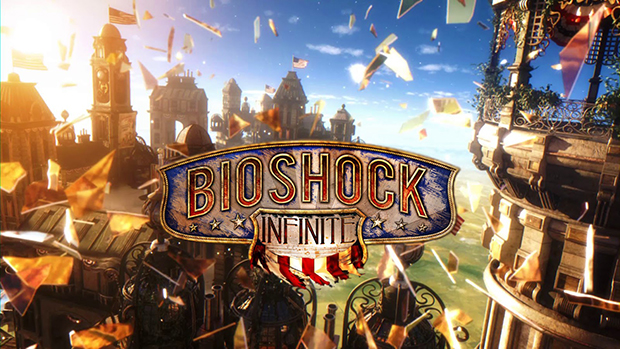 The most recent installment in the Bioshock series finally arrives. Does it live up to the name?

The first Bioshock game was one of the best-told stories in videogames, complete with solid gameplay and incredibly unique graphics, set in a world at the bottom of the sea. A sequel later, we’re treated to Bioshock Infinite, more of the same, but this time taking place in the city of Columbia – like Rapture, but floating around in the air and with added religion.

This similarity aside, while the game maintains some core Bioshock mechanics – big arrow pointing to your destination, Plasmids (now renamed “Vigors”) offering you various superpowers from fireballs to a murder of crows to fling at your enemies, and of course, the odd large enemy that stops you in your tracks.

This time around, you play Booker, a man cast into Columbia with a task – find a girl in the city, kidnap her, and take her to New York. Simple enough, surely? No. Because if it was, it’d be a very short, boring game and you’d wonder what else you’d be doing for the next ten hours. Not long after arriving in the city – clean and bright next to Rapture’s post-apocalyptic dark, dank hallways – you find that apparently people don’t take kindly to outsiders, and you’re soon shooting your way to your kidnapping target.

It’s shooting that’s a lot more slick and refined than 2K’s first and second attempts, that’s for sure – every gun feels more like something out of Call of Duty, and that’s definitely a compliment. Vigors feel like Plasmids – electrocute, burn and attack your enemies with a murder of crows amongst other abilities to bring an element of crowd control into your combat. As you upgrade your weaponry and Vigors, combat becomes not easier, but more thoughtful, and it’s a rewarding feeling. Shields are also now a Bioshock thing, and while it feels odd as the previous two titles have always gone for a split of what is essentially health and mana, the third bar just means a trickier decision whenever you’re upgrading one of the three.

Oh, the story of Infinite. At once elegantly told and clunky with misguided decisions. Without spoiling any of it, it’s definitely one of the best-told complex storylines in a game for some time, although unlike Bioshock, you may have to look up the last revelations for clarifications as to what they mean, exactly.

However, despite the skillful storytelling, there’s still a few kinks to work out with characterisation, as it’s yet another game that attempts to deal with racism but ends up confirming the worst held beliefs of those the game paints as villains. It’s not a tough topic to deal with – it just needs someone more capable of comprehending the risks inherent in dealing with such a sensitive topic in the context of 1920s America.

The characters are well fleshed out, as always, and Booker is an interesting one to play, given that he actually talks – extremely rare for the protagonist in a first-person game of any kind. It’s interesting not only seeing him communicate verbally, but interact with Elizabeth, the girl he’s there to abduct. Her AI allows her to express emotion, explore areas without your assistance, and even throws you ammunition and other supplies she finds along the way. While a female sidekick isn’t the most progressive choice, the ways in which she aids you feels innovative and actually helpful.

Bioshock Infinite is an improvement on the previous games in many ways – being able to zip around combat arenas on rails and warp cover, items and weaponry into existence is an exciting change from the standard corridor-shooting that Rapture’s claustrophobic underwater metropolis forced you into enduring. The AI feels better, the story is smart, the graphics are stunning and, most importantly, it’s still Bioshock – a series of games with the quality stamp firmly imprinted on them. This is a game that should be played regardless of your resultant opinion, as it’s a game that should be part of any conversation about recent releases.